Between faith and nature. Naturalistic devotional ring from the Brenta to the Piave

MARCH 9, 2020
ARTICLES | RELEASES
Between faith and nature. Naturalistic devotional ring from the Brenta to the Piave
One hundred kilometers on foot between faith, nature and culture:
here is the devoted path from Bassano to Pederobba

The route starts from the cathedral of Bassano, Santa Maria in Colle, a church of the tenth century, to descend into nature along the Brenta and Piave rivers, passing by medieval churches to arrive at the naturalistic reserve of the Pederobba garzaia which marks the center of the journey. of hikers / pilgrims. Here then begins the return journey towards the Cathedral of Bassano passing through the Asolo hills.

The idea will be presented, by order on Covid19 permitting, on Friday 27 March at 8.30 pm in Crocetta at the headquarters of the Mutual Aid Workers’ Society. The project comes from Sergio Ballestrin, member of the Anfi section (National Association of Financiers of Italy) of Montebelluna, which is based in Crocetta. Ballestrin and his wife are interested in environmental education as well as being very active in the Catholic world of Bassano which plays an important part in this initiative. “Last year the deacon Bruno Martino proposed to my wife Anastasia Sebellin and me to join the coordination” Together for the safeguard of Creation, a proposal open to all “, established in the Sinistra Brenta Pastoral Unit of Bassano del Grappa” , explains Ballestrin who, in the context of coordination planning, whose action wants to follow the message of Pope Francis ‘encyclical, Laudato Si’, proposed the idea. “It had been a long time, however, that I had in mind to connect the Brenta to the Piave with a circular hiking trail,” continues the creator of this project.

The complete ring is 100 kilometers long. The high path along the slopes of Monte Grappa is 49 kilometers long, while the low one along the hilly strip is 51 kilometers long, with a total difference in height of over 1,800 meters for the various ups and downs. It can be tackled in stages, and at a slow pace “The main purpose of the initiative is to enhance the area with sustainable and environmentally friendly tourism”, concludes Ballestrin. In fact, the ring encompasses the entire foothill area, allows you to exit the path to see other beauties in nearby places, and is easily accessible by public transport. Furthermore, it is intended to be a reference point for the cycle and pedestrian paths already existing in the area. Along the way you will encounter valuable natural environments (from valleys to woods, from meadows to wetlands), a long series of small medieval buildings of worship and four sanctuaries: the Madonna del Covolo in Crespano, the Madonna della Rocca in Cornuda, the Madonna del Monte (“Ceseta rossa”) in San Zenone and the Madonna del acqua in Mussolente.
article by Gino Zangrando for www.tribunatreviso.it of 5 March 2020 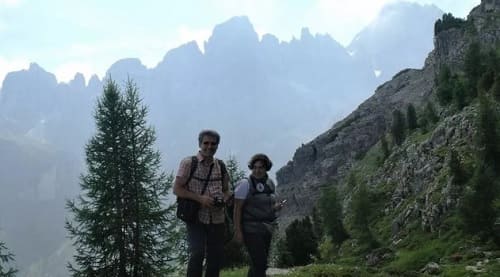