Semi-hard and semi-cooked cheese, straw yellow in color, which becomes charged if produced in the mountain pastures. Sapid and persistent, taste and aroma with marked herbaceous notes. The seasoning can be longer than one year.

The “bastard” cheese is a cheese whose production dates back to the 19th century, a period in which it was produced in the Veneto mountain huts. So called because it is a processing hybrid between Asiago pressed and Asiago d’allevo. It is a traditional product of the Grappa pastures. It seems probable that the spread of this type of cheese developed after World War II with the affirmation of less precarious economic and social conditions.
The remarkable diversity of environments present in the Grappa ensures forages with very rich and varied flora. This allows to bring a greater richness of aromas and flavors to the milk.

It is a cheese produced with semi-fat cow’s milk, rennet curdling, with a semi-cooked paste. Obtained in the malga from raw milk, partially skimmed by surfacing, or in downstream plants, subjected to heat treatment. It has a cylindrical shape, weighing from 2.5 to 5 kg, diameter 20-35 cm, straight side 5-8 cm high, flat faces, dry and clean rind. The paste is soft, straw yellow, with small holes, a more pronounced color when ripe. The aging also brings variations to the consistency of the pasta which becomes progressively more grainy but absolutely compact. Sweet, savory flavor, which becomes more intense when aged, pleasant scent is accentuated when ripe.

In the malga, the milk from the evening milking is placed in outcrop tanks in a ventilated room called “Cason dell’Aria”, and left there until the next morning. It is then separated from the fat, placed in a copper caldera and mixed with the milk from the morning milking, to be heated to a temperature between 38 ° and 42 ° C, adding the rennet. The curd is left to rest for 25-30 minutes, then finely broken and heated again up to 48 ° – 50 ° C. It is divided into portions of adequate size, which are extracted by means of cloths and then placed in perforated molds to allow purging. of the whey, then in wooden molds and subjected to light pressing. The form is left to rest in “cason del fogo” for 2-3 days, until the dough takes on a soft consistency. Salting lasts for 4-5 days. The maturation takes place in a suitable room called “casarin”, for at least 25 days. Aging can exceed one year. During this stay, the cheese is frequently turned over to facilitate drying and subjected to scraping and oiling to eliminate any molds present.

The “bastardo” cheese is available in the Grappa huts and in the local dairies from June to October.

Bastardo del Grappa cheese should be eaten raw as an appetizer or as a main course but can also be fried or grilled. 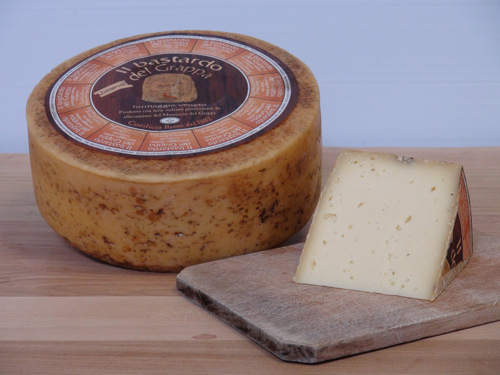