At the abbey of Follina, water becomes music

30 NOVEMBER 2015
ARTICLES | RELEASES
The itinerary – At the abbey of Follina, water becomes music
At the abbey of Follina, water becomes music
The abbey is a place full of enchanting history and is set in one of the most fascinating areas of Veneto in the heart of the Treviso hills
The sound of concerts and spinning wheels has marked the centuries
In the cloister all the elements of paradise are found
.
It seems that the ancient sandstone statue of the Madonna of the Sacred Chalice, which has always been the object of veneration of the local and non-local faithful, had already proved its stubbornness in ancient times. Probably carved in Sudan in the sixth century and fortunately arrived in Follina with the monks who fled the Arab invasion of Nubia a century later, it is said to have been equally fortunately found in a field around the year 1000 and placed in some sacred place in the area. . But that three times, mysteriously, she returned right there, where she has been venerated for more than a thousand years.

Popular legends aside, it seems that stubbornness, the Servants of Mary – friars who have been taking care of the abbey of Santa Maria di Follina since 1915 – know it well. There are only four left to think about the conservation and tourist influx of a precious complex threatened by infiltrations, subsidence and cracks. But their voice, after long appeals accepted and amplified by local administrators and beyond, made itself heard. Public and private entities in the area have provided for the restoration of the staircase and now huge regional funds have also been allocated to continue the works that will be completed by 2016, to give the monumental complex also the possibility of hosting pilgrims in the guesthouse, which has not been used for many years. for structural problems.

The official welcome to Follina is given by a banner on the side of the road that reproduces the gush of the fountain in the small Renaissance cloister of the abbey and warns that one has arrived in the village “where water becomes music”. Words wisely chosen to tell the importance of water and art, but also of “becoming” which here, as in all places rich in history, is a fundamental keystone of social life. The waterways of Follina, Soligo, Corin and Fiadora flow almost everywhere, albeit irregularly, skirting paths and embellishing landscape views. Over the centuries they have powered the water wheels of mills, sawmills, hammers and, above all, silk spinning wheels and cloth fools. Becoming, in fact, one of the engines of the local economy. Music, which today is mainly that of the numerous concerts hosted by the abbey, is also one of the founding elements of its structure. In fact, the Cistercian monks who brought it to its maximum splendor paid great attention to the close relationship between music and architecture, obtaining perfect acoustic results. It will be enough to listen to one of the many concerts offered in the basilica to understand the wonders of which the anonymous builders of such austere beauty were capable. Also true champions of the international concert scene are well aware of this, who always play here with great enthusiasm, first of all the violinist Uto Ughi (honorary Follinese) who for twenty-five years, in November, has offered a concert here in support of maintenance and restoration of the abbey. Because where water becomes music, music can become stone. Healed.

Heaven in a cloister.

Visiting the abbey of Follina means getting lost in paths of silence and symbolism. The Gothic style of the church naves and the Romanesque style of the three square apses blend harmoniously with the play of light and shadow of the rose window and the two elongated windows. A plaque in the cloister shows the names of its builders, who made it according to Cistercian customs, with the arches supported by similar but never the same columns, different in the stems (twisted, smooth, smooth, wavy, papyrus-shaped or with flower decoration lotus) and also in the capitals (now geometric, now naturalistic, now symbolic), with the particular ophitic column, that is knotted. Those lucky enough to find one of the very kind friars of the abbey in the cloister can be guided in the discovery of the thousand signs that testify how the Cistercians managed to insert all the elements of paradise into it.

The monks of Sanavalle.
“Between the mountain and the plain and near a river or a stream so that everything you need, that is, water, the vegetable garden, the workshops and the various handicrafts can find a place within the walls”. According to the Cistercian order, a monastic center could only arise in a location that met these requirements. This is why Follina was considered ideal by the monks of the Chiaravalle Abbey in Milan who, in 1146, arrived where a monastic center had already been built before the year 1000

Benedictine dependent on San Fermo di Verona. According to tradition, it was the Benedictines who found near Follina the statue of the Madonna of the Sacred Chalice today located in the center of the main altar and which has always been a destination for pilgrimages (including that of the Alpago Bellunesi who asked for protection from the fog by descending on foot towards the sanctuary). And it was the ingenuity of the Cistercians to redesign, not only the abbey but the entire site, which they renamed “Sanavalle” in homage to the happiness of the place, where they also started what became the main productive activity in the area: the “fulling” of woolen cloths, favored by the abundance of pastures and streams. It is the name of the town itself that highlights the extent to which the art of wool processing has taken root, making Follina a center of international importance for the textile industry. The activity quickly declined at the end of the nineteenth century due to the increasingly frequent scarcity of water, forcing over a thousand Follinesi to emigrate. Today in Follina only the Paoletti wool mill remains active, founded in 1795: it was the first, in the nineteenth century, to integrate hydraulic energy with that produced by a steam locomotive. Where water became wool, the streams rebelled against exploitation.

From 5 to 8 December Follina hosts Colori d’inverno: Christmas markets with hobbyists, artisans and small traders, as well as numerous dining options. A fairly recent but already very successful tradition, also thanks to the enchanting setting. This year the exhibition itinerary, made entirely of Christmas wooden houses, for the first time, will not be limited to the square at the foot of the abbey but will wind through the streets and historic buildings of the town. In this scenario, therefore, the elegant buildings of the historic center, such as Barberis Rusca, Milani, Tandura and the former Lanificio Andretta, now a multifunctional public building, will also return as protagonists.

An evocative operation of recovery of ancient knowledge that is part of the “genetic heritage” of the city and still represents an important economic outlet, whose opportunities for growth and relaunch deserve reflection. The review of events on the culture of wool usually takes place in May and has as its epicenter the historic Lanificio Paoletti which welcomes playful, educational moments and children approaching the world of wool, conferences and an interesting temporary shop for designer creations emerging in the area.

I Borghi – Medieval glimpses in the woods

Near Follina there are two small medieval villages: Campea and Premaor, which can be visited with a rather simple walk through chestnut woods mixed with acacias, hornbeams and Verdiso and Prosecco vineyards. Not far away, in Cison di Valmarino, is Castelbrando. Former home of the Da Camino and Gattamelata family before becoming the property – in the sixteenth century – of the Brandolini family, who made it one of the largest castles in Europe, it has kept the ancient structures unaltered with a restoration that has made it a modern hotel and multifunctional center full – among other things – of small and interesting museums.

The exhibition – Tribute to Nardi, mayor-artist

In the council chamber of the Municipality, Follina pays homage to one of his most appreciated artists, Sandro Nardi (1915-1998), with a permanent exhibition of some of his works characterized by a very personal figurative style that evolves towards abstract art. After his partisan experience, Nardi was mayor of Follina for a decade and in the meantime he exhibited in Italy and abroad alongside the most famous Italian artists of the early twentieth century: de Chirico, de Pisis, Morandi, Carrà, Campigli. The collection opens to the public only on Thursday mornings, from 10 to 11.30 or by appointment (Municipality of Follina, tel. 0438.9733).

Tre Ponti – Among the streams painted by Canaletto

South of the center of Follina, in Tre Ponti, you can easily find an ancient stone bridge at the confluence of the Soligo, Follina and San Pietro streams, which seems to have also been portrayed in some etchings by Canaletto. It was part of a Roman road artery: according to some scholars it was located on the route of the Claudia Augusta Altinate, while for others it would have been erected at a later date. Here the Cistercian monks made a deep incision in the ground that allowed the waters of the rivers to flow back, freeing the lands around the hill where the abbey complex stands.

By car through the Treviso hills

To get to Follina you cross the soft Treviso hills to the foot of the Prealps. From the A27 Vittorio Veneto Nord exit, take the Valdobbiadene direction. Or, from the Pontebbana state road, between Treviso and Conegliano, at Ponte della Priula, take the SP34. 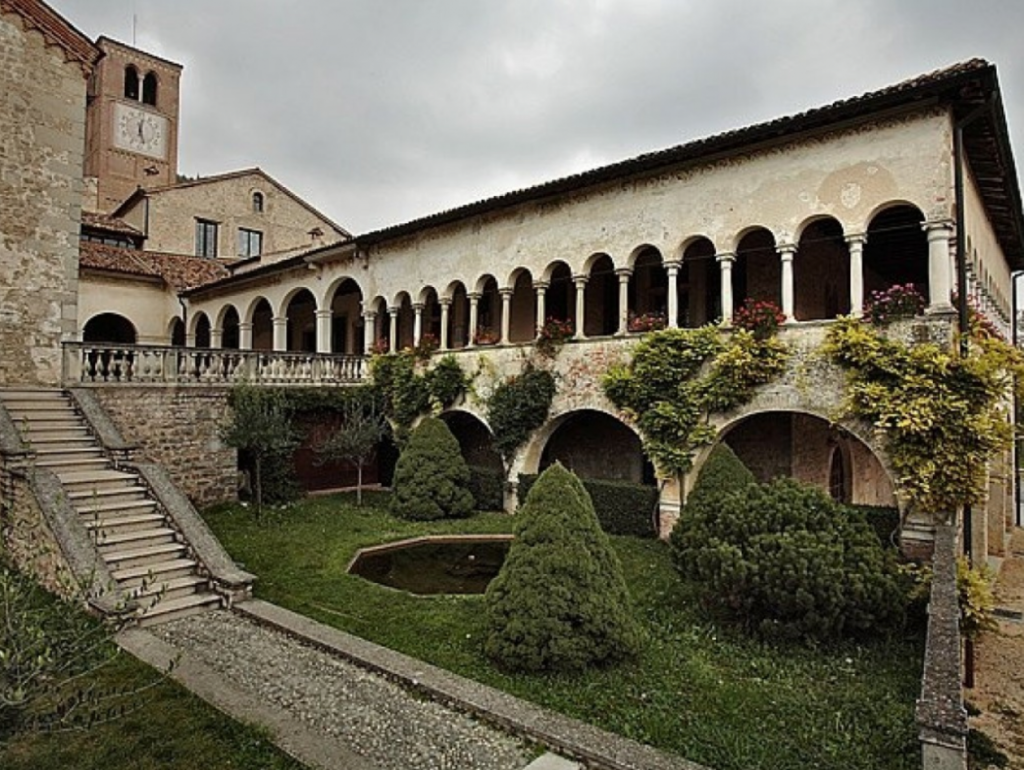