At Canova’s house in Possagno, history and beauty

13 JULY 2018
ARTICLES | RELEASES
At Canova’s house in Possagno, history and beauty
The unattainable art of the sculptor Antonio Canova is kept in major museums around the world but his heart is here, in the Gypsotheca of Possagno.

It was made by his half-brother to keep almost all the original plaster models.
“I don’t hate nisun.” With these words spoken in his native parlance, in 1798 Antonio Canova left Rome where he had already lived for about twenty years and where the French occupiers had just established the Republic, calling him to join the Institut National. But, since the settlement formula required him to swear hatred to the sovereigns, with an all-mountain dryness and the resoluteness of someone who knows how to talk about marble, he preferred to take a long vacation in his Possagno, where he had returned and returned again. a few times, but with which he never ceased to be in constant contact. He was already an established artist in all European courts and very rich, but he preferred to return to the simple life of Valcavasia, where the softness of the Asolo hills slopes on one side towards the western bank of the Piave and on the other meets the southern buttresses of Mount Grappa.

The genius and the simple life.
Here he retired to paint in the family home along the main street of the town: a typically Venetian seventeenth-century house on several floors, where he found the domestic environments and the long arcades, the orchard, the garden. A house that he himself had enlarged in two stages and which is still like this, with still some original early 19th century furniture and rooms that house his paintings, engravings, drawings, some marbles, work tools and some clothing. he. Where you can still visit the room where he was born, the basement where the Sculpture Studio is set up and the Tower with the Painting Studio. And even if, for those who arrive in Possagno, the call of the imposing Canova Temple is overwhelming, which with its limpid mass unmistakably marks the wide green basin of the valley, to better orientate yourself in the greatness of Canova’s human and artistic life it is advisable to leave right from there, perhaps with a guided tour that allows you to better read the many stories (from the mythological ones related to the works to their clients, from the artist’s studies to the wounds inflicted on his artistic legacy from the Great War) that are intertwined both in the house, both in the adjacent Gipsoteca.
A fragile museum
If Canova’s unrivaled art is kept in the main museums around the world, his heart is here, in the monumental Gipsoteca which collects almost all the original plaster models of his Roman studio in via della Colonnette and that his half-brother, the bishop Giovanni Battista Sartori, had it built in the garden of his house to exhibit the works, establishing their position himself and recreating the exhibition of the sculptor’s atelier. In 1917, a grenade hit the Gipsoteca. Some plaster casts were completely destroyed and many others were seriously damaged, but a grandiose restoration work (by the conservators Stefano and Siro Serafin) allowed the museum to reopen as early as 1922. To prevent further damage, when the Second World War broke out, the Gipsoteca it was partly emptied. The current layout also presents some variations due to the contribution of Carlo Scarpa who, in 1957, created annexed rooms that constitute one of the most admirable examples of modern museography: spaces that exploit the incidence of natural light and the characteristics of the covering materials. to enhance the plaster casts distributed on staggered levels and also accommodate all the sketches. And to the uniqueness of the collection is added the preciousness of the spectacular architectural envelope, the only one entirely completed by the architect.
In the garden, a pine from 1799
In a corner of the garden of Canova’s house stands a mighty Italian pine, a shady “pignara” tree, which was planted by the artist himself. in 1799.
The Foundation – Assets to the community
The Canova Foundation, established in 1853, still manages the legacy of the sculptor to his brother, the only heir, and from these to the community of Possagno.
Possagno

The experience of the virtual visit and the scanning of the statues
“Canova Experience” is the new technological communication platform for visiting the Canova Museum and the Gipsoteca, which attract about fifty thousand visitors every year. The digitalization of the Canovian archive, the architectural mapping and the three-dimensional scanning of the statues make it possible to use numerous insights on each work on the touch screen totem and via QR code, while the virtual tours overcome architectural and geographical barriers. One allows you to see the Gipsoteca damaged by the bombing of 1917. (canovaexperience.com).
In the Temple the works and the tomb

The colonnade inspired by the Partenone and the central body reminiscent of the Pantheon: Canova went back to Greek and Roman culture for the Temple that dominates Possagno, the parish church that in 1818 he wanted to finance with the help of the manpower of his fellow villagers. After his death (1822), it was Sartori, who became bishop, who completed the work and consecrated him in 1832. Since then, it has hosted numerous works and the artist’s tomb with great spatial effect. While the contrast between the white of the large building and the green of the mountain behind it is an integral part of the landscape.

Tastes not to be missed

The Morlacchi arrived on the Grappa Massif from Dalmatia at the time of the Serenissima: a people of shepherds and woodcutters, they made a cheese made with raw, defatted milk and with the sole addition of salt with the milk left over from the production of butter (destined for trade). Morlacco, a cheese that took its name from that people, was for a long time considered a by-product of butter and is mentioned in documents of the nineteenth century as a cheese “of the poàreti”, precisely because for the slender structure and the savory flavor that they made the frequent accompaniment of polenta. The recent enhancement of this cheese means that even the dairies in the valley produce excellent versions, but looking for it in the mountain huts of Monte Grappa still means discovering an extraordinary wealth of aromas (due to the rich and varied flora of the pastures) which is accentuated with the maturation, and a salty but not spicy flavor, unique and captivating.

“Bastardo” is also a highly sought-after cheese from the Grappa huts, which owes its name to the mixture of animal milk (sheep, goat, cow) with which it was once produced. Today it is made only with cow’s milk and has a sweet, herbaceous taste, which becomes savory with aging; each different pasture provides different markers.

Another local product of great quality is the extra virgin olive oil from the Pedemontana del Grappa, made according to a specification that guarantees a golden green oil with yellow hues. aroma of fresh olives and fruity sensations. It conquers the most demanding peeled tomatoes with its delicate and sweet taste, due to the very low percentage of acidity.

articles by Marina Grasso for www.tribunatreviso.it of 12.7.2018 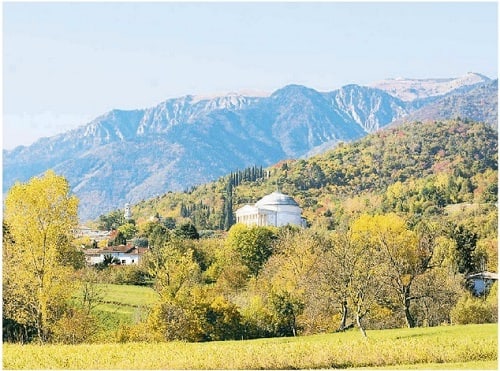