Asolo is a candidate for Unesco World Heritage Site

14 JANUARY 2020
ARTICLES | RELEASES
Asolo is a candidate for Unesco World Heritage Site
The announcement given by the mayor Mauro Migliorini: “We have all the requirements to aspire to obtain the prestigious award as early as 2023”

The historic center of Asolo is a candidate for Unesco World Heritage Site. After the prestigious brand was conquered last summer from the Prosecco hills of Conegliano and Valdobbiadene, 25 years after the inclusion of Palladian villas in the list of World Heritage sites including Villa Barbaro in Maser, Villa Emo in Fanzolo di Vedelago and the less known Villa Zeno di Cessalto, the Marca is preparing for another destination.
In the town hall, the mayor Mauro Migliorini made official the start of the path towards the ambitious goal. With the first resolution approved in 2020, the junta has in fact embarked on the process, giving a mandate to the municipal deputy secretary’s office to start with market surveys to identify a company that prepares a feasibility study and time schedule.

Migliorini already sees further: “Based on my forecasts, we will get the Unesco logo in 2023”. The conditions, according to the junta, are all there. “The historic center of Asolo falls within the definition given by the World Heritage Center for the category of sites“ Cultural Heritage – agglomerations ”, explains Migliorini. The category includes “groups of isolated or combined buildings which, due to their architecture, unity or integration into the landscape, have an exceptional universal value from a historical, artistic or scientific aspect”.

He was the first citizen to list the reasons why Asolo falls perfectly in the definition, “starting with the cultural heritage handed down by the prestigious millennial history. We have the first writings of Pliny the Elder in the first century after Christ, from the Roman municipium onwards ”.
There are several excellences that have already made the Municipality rich in awards. The “city of a hundred horizons” is in fact already the City of Oil, the City of Wine, the City of Honey, but it is also one of the Most Beautiful Villages in Italy, in the Cittàslow International network, as well as carrying the Orange Flag of the Touring Club.

The steps of Napoleon and Queen Mother
in the landscape immortalized by Giorgione, Lotto, Bassano

And the timeless charm of the village of 100 horizons

The timeless charm of an extraordinary position, in the middle of a hilly nativity scene, in an ideal terrace almost suspended between the plain and the Pre-Alps. And again, the layers of an infinite history, from the Paleolithic to the 1900s, marked by the Romans and the Serenissima, the French and the Habsburgs. The views that led Giosuè Carducci to call it “the city of a hundred horizons”, implicitly evoking a broader gaze than Leopardi’s in Recanati. The traces of the thousand illustrious passages, the vestiges of the splendors of the Renaissance, of the international vocation reached as early as 1800, the echoes of the Napoleonic victories and the surrounding Palladian (and not only) villas. The guests, from Duse (with the fleeting visits of Gabriele D’Annunzio), a planetary diva ante litteram, to the English poet Roberto Browning, from the composer Pier Francesco Malipiero to the English explorer Freya Stark. And again the footsteps of Palladio and Canova, Stravinskij and Hemingway, Francois Mitterrand, of the Queen Mother of England, of Catherine Deneuve. And again the passages of Henry James, by Carlo Scarpa, buried standing like samurai a few kilometers from here. A village – it is no coincidence that it immediately entered the ranks of the most beautiful in Italy, capable of making the world talk and talking to the world when tourism was an optional – Asolo, and the suggestions are amplified, and merge along the thread of centuries, like the conduits of the ancient Roman aqueduct. From the Rocca that crowns Monte Ricco, to the mallet of Pagnano from the house (erroneously) defined Lombard to the solemn plaques, whether they evoke the love story between Duse and the poet D’Annunzuio, or celebrate the passage of Napoleon, and this to dictate freer and more sparkling counterparts, like the plaque that plays on the “Bonaparte of women …” And sparkling doesn’t seem out of place, given the bubbles of Prosecco Docg, the indigenous pride of these hills. They are the backgrounds of Giorgione and Lotto, of the Bassano, but also the sets of many films, not only of Tinto Brass. The places where Bembo, here at the court of Caterina Cornaro, laid the foundations of the vernacular, and therefore of the Italian language, codifying the Petrarchian dictates. Of the Rinnovati theater, the little jewel, of the daring association of the nobles of the province of the ‘700 fascinated by the lights of the Alps. From the square to the castle, from the convent of San Pietro to the church of San Gottardo, from the arcades of via Browning to the osterie is a succession of arches and columns, of shops of precious craftsmanship, and finally of glimpses and openings, houses clinging to the hills like wings of an aerial theater, half suspended in the enchantment of hills that have nothing to envy to those of Tuscany. Precious oil included for the olive trees that now decorate the gentle slopes.
Articles by Maria Chiara Pellizzari and Andrea Passerini of 10 January 2020 for www.tribunatreviso.it 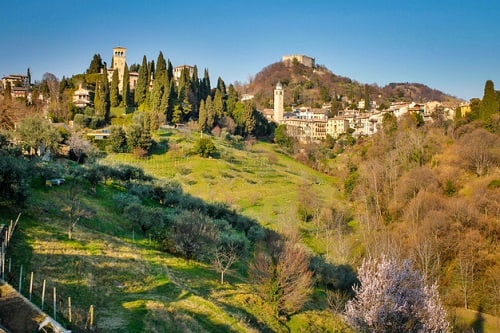