An Art’s tresure hidden among the hills.

San Micheal. A small church hidden in the hills of Conegliano Valdobbiadene
Finding it is not easy. Enter even more. The church is open ONLY ONE DAY A YEAR. The writer will reveal neither the place nor the day. It is good that it stays that way; hidden and found only to the most determined to do so. A quiet place permeated with PEACE is right to remain so. The water flowing up there was considered BLESSED.

The church of San Michele Arcangelo is well hidden among the vines of the Unesco Heritage Hills: a pleasant place, in the hills of Serre, in Miane, which inspires peace and meditation built around 1340 by the Benedictine monks of the nearby Abbey of Follina.

The place is quiet and isolated, probably chosen at the time by the friars to be able to retire in meditation and prayer, away from the daily noise and bustle. The motion “Ora et Labora” (pray and work) is perfectly suited to this solitary hamlet made up of three separate but close buildings. In the center, the small church that from the outside does not have the typical characteristics of the century in which it was built.

On the left, turning your back to the small entrance door is the old ruin, which served as a refectory, where the friars gathered for the frugal meals they shared with the needy who went up here, sure of finding hospitality.

On the right, the old stable where the Benedictines housed the cattle that would provide milk for the cheeses and meat for their sustenance. The vines surround the three buildings and certainly even then the wine was of good quality.

The visitor’s gaze is lost, sweeping 360 degrees through the hills, offering a unique view, which combines the true essence of these places with its most ancient history.

You can only imagine how it could be in winter, with snow: a real Nativity scene or go back in time and imagine the Benedictine monks who work the vineyards, look after the cattle in the nearby stable, and then have lunch together in the small refectory, with their products, such as oil, wine, cheese, and bread certainly made in an old oven.

This is the church of “San Micel” which is open to the public only once a year, on a date that will not be revealed to protect its peace and tranquility.

The interior develops in a long and narrow space, suitable for a few dozen faithful. Here too there are no references to the time of construction but the eye is attracted almost immediately by the original wooden altar on which stands a central altarpiece depicting a Madonna with Child at the foot of which on the right St. Anthony with the lily that distinguishes it in his hand he turns his gaze to the Virgin, and on the left St. Michael holding a scale in his hand to signify Justice. At his feet curled up and defeated the devil. On the sides of the altarpiece two female figures.

The visitor’s eye is immediately attracted by the original wooden altar and the “altarpiece” that is placed above it, representing the figure of the Virgin with the Child to the right of which the familiar figure of St. Anthony of Padua holding a beautiful white lily. On the left, the figure of St. Michael the Archangel with the sword while controlling Lucifer, now defeated and helpless at his feet.

It is also said that a water flowing downstream, once blessed in this sacred place, became miraculous, so much so as to drive out demons and heal witches. The dedication to St. Michael, victor over Lucifer, testifies to this peculiarity.

The church began to become a collection point for oil, wine, grapes, sorghum, wheat for the parishes of the Pieve di Miane; the tradition of delivering the quartese, that is the fortieth part of the harvest at San Micèl, lasted until the early seventies.

The building has been renovated several times over the centuries and the original frescoes have unfortunately been covered. the triangle above the altarpiece: representing the Creator surrounded by cherubs who, pointing to the dove of the Holy Spirit, seems to open up in a loving embrace towards all humanity; the two canvases on the sides of the altar, on the left for the viewer: dedication to St. Agatha with martyrdom through the removal of both breasts; right: dedication to St. Eulalia with martyrdom by removing both hands.

Cesare De Stefani, of the Osteria Senz’Oste, has always been a frequent visitor to this pleasant place: “I have been coming here for many years now – declares the most famous host in Italy – It is a place where I come to rest my mind and the spirit, to meditate. I sit alone looking at the Hills, I seem to breathe their history. It is a special place to remain silent and listen to each other, unplug, isolate yourself even if only for an hour from the daily hustle and bustle “(All photos and texts are copyright pious from cin 2021- @reproduction reserved) – MARCADOC The Hills of Venice – exclusive 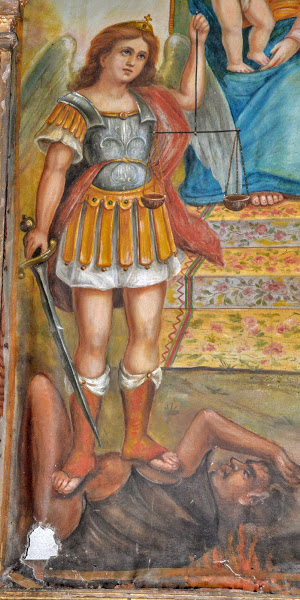