22 AUGUST 2017
ARTICLES
A trip to Monte Cesen, the Treviso Dolomites
The walks along the paths of Monte Cesen allow you to see evocative views of the Alps of the Dolomites and the Venetian plain.
.
Valdobbiadene – The number of tourists from Pianezze is walking through woods and paths.
.
It will not have the charm of the Dolomites, but it offers a suggestive alternative just a few kilometers from home. This is why Cesen is becoming the Trevigiani mountain. Trekking, mountain biking, but also slow walks with lamas as well as a highly respectable food and wine offer. But for those who want to know the secrets of nature do not miss the walkway of historic trees.
.
The landscape that leads from Pianezze to the slopes of Cesen is an alternation of wooded areas, meadows and pastures still used today for mountain pasture in the malga.
.
The main paths start from the square in Pianezze, which allow you to reach all the mountain huts on the slopes of Cesen: Malga Faè, Malga Barbarìa, Malga Mariech, Malga Budoi, Malga Domion to the east, Malga Molvine and Agriturismo Balcon to the west.

.
One of the most interesting and easy is the Path of the aqueduct and of the sockets, an annular path that, through a series of educational panels, introduces the hiker to the geological aspects, flora, fauna and human history in these mountains . An authentic wonder of this itinerary is the presence, along the way, of a series of centuries-old beech trees, trees considered sacred in ancient times for their longevity. We meet them first in the locality of Borri, then at the casere Fontana, finally lying on the edges of the placid Balcon meadows. Authentic monuments to nature, they are entrusted to the protection of the forestry corps. Along the forest we also have the opportunity to learn to recognize trees, thanks to the correct signs placed at the base of the main varieties of shrubs that make up the woodland flora. Thus, the difference between spruce and white fir, black and white hornbeam, the unmistakable birch bark, the elastic wood of the ash, the delicate leaf of the English oak is revealed. Approaching some water pose, you can sometimes make lucky encounters with buzzards, hawks, roe deer, more easily if you walk while keeping the conversation volume.

For lovers of two wheels, there is the mountain bike ring: a sequence of magnificent views, pastures, huts, but also dense woods. It is a fairly challenging loop, for experts, mostly due to the two long climbs and a few passages with a rather bad dirt road, especially if it is muddy.
.
Those who are more anchored to slow mobility can choose trekking with llamas (already used in many pre-alpine areas) soon available for the discovery of Mount Cesen. Excursions for groups of 7 to 20 people will start from Pianezze. It should be clarified that lamas do not ride, lamas are animals that slowly accompany our journey.
.
Transgenerational and dedicated to adventure trails, the new park in Pianezze was also born: ropes, ropes, cableways, Tibetan bridges, slacklines, climbing nets and 26 different attractive pitches. Three paths, for all ages, to feel, at least one afternoon in your life, like Indiana Jones.
.
Article by Elena Filini taken from www.gazzettino.it of 20 August 2017 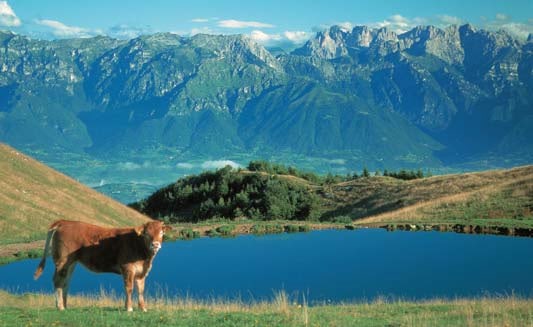