A slow trip to Treviso, the treasure chest of good living

Treviso with its canals, its frescoes and decorations, with its classy boutiques with its villas and gardens is an enchantment. A quiet but sparkling place will also be thanks to its prosecco, a city of culture and a refined nest of architecture, Treviso industrious and engine of the economy.

His medieval style is a crescendo of emotions. Enclosed and elegant with its good living room and place to rub shoulders at all hours of the day.

Itinerary. From Ponte S. Martino, near the railway station, through Corso del Popolo, you arrive in the heart of the city, Piazza dei Signori, which is red with the Gothic battlements of the Palazzo dei Trecento and the Civic Tower. Along the Calmaggiore you arrive at the Duomo, a superimposition of styles on Romanesque foundations, with a white neoclassical facade. And then a few more steps to get to the cathedral of S. Nicolò which dates back to the 13th century, next to which the Sala del Capitolo dei Domenicani of the Episcopal Seminary frescoed by Tommaso Da Modena.

Through the shaded streets of the garden city, Borgo Cavour, where you can visit the Civic Museum and, then, along Via Canova with the medieval houses that lead back to Piazza Duomo.

And if the curiosity is not just women, you cannot miss a tour of Piazza S. Vito passing in front of the characteristic Fontana delle Tette, one of the symbols of the city; on the back the characteristic Buranelli canal flanked by a porticoed alley. Not far away is the other imposing Romanesque-Gothic church, S. Francesco.

The colors of the earth and water meet at the islet of the fish market, overlooked by Cà dei Carraresi, where you can admire the path that tells the story of India, an unmissable and impactful event. Taking via S. Agostino, here we are at the former convent of S. Caterina, now a museum that houses the stories of S. Orsola frescoed by Tommaso Da Modena. From here, through Piazza S. Maria Maggiore with the church of the same name, you reach the point where the Sile meets the Cagnan, in Ponte Dante. The visit is coming to an end, at least as regards the visit of the center, to see the university, the first hospital, the Loggia dei Cavalieri, the Santa Margherita bridge up to the S. Martino bridge, the starting point of the tour.

And, for those who are not satisfied and still have a few days of vacation, a tour of the wonders of the province of art, culture, food and wine and good wine cannot be missed. 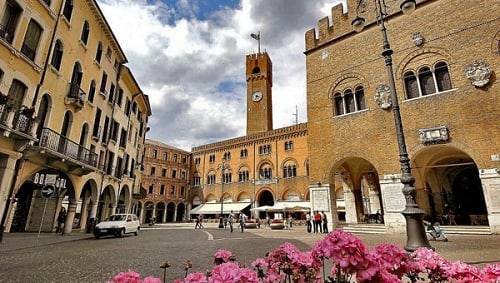