18 SEPTEMBER 2014
ARTICLES | RELEASES
Monte Grappa between history, nature and excursions
(ANSA) – Grappa, nestled in the heart of the Venetian Pre-Alps and on the borders between the provinces of Treviso, Vicenza and Belluno, is considered the “out of town” mountain par excellence for a trip or a holiday of relaxation, culture and history. It represents an important stage for fans of the testimonies of the Great War, one of the most significant moments in the history of war: 23,000 soldiers died here and for this reason the Grappa earned the name of “sacred mountain to the Fatherland”. The remains of 12,615 fallen are kept in the Ossuary of Grappa, of which 10,332 are unknown. Monte Grappa is the ideal place for tourism for those who want to enjoy a refreshing break in contact with nature, partly wild and rugged, away from mass tourism and organized offers. The highest point of the mountain, at an altitude of 1,775 meters, can be reached through narrow streets and paths surrounded by greenery, to discover new horizons. There are a dozen itineraries on foot, accessible to all and passable within a couple of hours, with the possibility for the more trained to lengthen the route further. The best known and most popular are the Path of the stonecutters (which offers sweeping views of the mouth of the Brenta canal and the plain), the Campo Solagna mule track (which overlooks the Valbrenta) and the nature trail of the Col del Gallo mountain hut in the woods. , pastures and trenches. The itinerary “The trench of San Giovanni” has a great historical impact, which can be covered completely, walking inside, where didactic tables illustrating the life of soldiers in the trenches are displayed. The most challenging but also fascinating is the “From Grappa to Pertica” itinerary: from Rifugio Scarpon climbing towards Cima Grappa you cross the “path of the cippi” (so called for the numerous tombstones in memory of war events ) and take the military mule track to reach the top. (HANDLE).

Cima Grappa – 5 hours
From the Albergo di Campo Croce you go up the meadows along traces of the path until you reach a well marked (signpost n ° 100) that leads to the ridge M. Legnarola, M. Palla, M. Colombera, M.Meda, which you follow entirely up to at Cima Grappa. The descent, along path no. 80, goes into the Lebi Valley until it crosses the road that connects Campo Solagna to Campo Croce for which, in a short time, you can reach this last place.

Monte Colombera – 5.30 am
From the Sanctuary of the Madonna del Covolo you reach the valley and then go up to the ridge of Mount Colombera along the path n ° 104. The view opens up to ever wider views of the plain below until you reach the top of Mount Colombera (1449 m) right on the summit edge of the Massif. From here the military Arrocamento road leads to the right to the Ardosa plateau where you take the mule track on the right downhill which descends to the Covolo sanctuary through the Madonna valley. A shortcut, marked with the number 106, allows you to cut numerous hairpin bends, thus shortening the path.

Via Sassumà – 5.30 am
From the village of Schievenin continue along the valley floor up to the climbing wall. On the right a path goes up towards a narrow gorge that opens higher up with a beautiful view of the rocky monolith of the Manuela bell tower. Touching some abandoned villages you arrive at Forcella Alta (paths n ° 842-847-848). For a ridge exopsta you go down to Forcella Basa and then, through the Val d’Inferno, to the starting point.

Meatte – 6.30 am
from the chapel dedicated to the saints Liberale and Vitale, in the Lastego valley behind Paderno del Grappa, path no. 151 goes up to Pian della Bala. from here the obvious military entrenchment mule track leads to the right to the Ardosa plateau where you take the mule track on the right downhill that goes downhill through the Madonna valley to the Covolo sanctuary. A shortcut, marked with the number 106, allows you to cut numerous hairpin bends, thus shortening the path.

I Salaroli – 5.30 am
From the Cima Grappa refuge, path no. 156 runs along the Salaroli ridge, touching trenches and remains of positions from the 1915/18 war in numerous points, up to Mount Valderoa. From here with a short descent to Malga Salarol, where you take the pastoral forest road which, passing through Malga Cason del Sol, through the Mure valley leads to Pian della Bala. From here a path marked with n ° 151 leads back to the Cima del Grappa.

Col Fenilon – 5.30 am
Behind the village of San Nazario a beautiful military path (n ° 38) climbs a steep ridge in a wild environment at the base of the rocky walls of the Colli Alti. The last stretch takes place on the summit pastures until you reach the rounded summit of Col Fenilon. From here you can quickly reach Col Moschin and the homonymous hut. Just below this, after a short stretch of road, a be

the mule track (n ° 36) goes back down to Valbrenta. When you reach the bottom of the Val del Merlo, take the path that crosses the opposite side to quickly reach the town of S. Nazario.

The Col dei Prai – 4.30 am
From the Piazza di Cismon, a beautiful paved mule track climbs up the Val Goccia passing by the daring rocky pinnacle of the Gusella. After about an hour’s walk, path no. 13 branches off to the left going up the Val Lavello, then through beautiful meadows dotted with casere it reaches the Forcelletto tree. Behind this a pastoral forest road leads to Malga Fiabernù. Following the ridge, path n ° 10, with an extremely panoramic route, takes you back to the Goccia valley below the Gusella.

Don Paolo Chiavacci nature trail – 2.30 hours
It is a circular route between Casa Don Bosco and the Sanctuary of Covolo. It remains at high altitude and does not present particular difficulties. For any other information you can consult the excellent guide entitled: “Don Bosco nature trail in Chiavacci” edited by the Center for encounters with nature at Casa Don Bosco in Crespano del Grappa.

The ring of the southern side – 3 days
First day: leaving the car at the San Liberale refuge, go up the Lastego Valley for the first part of path no. 151 up to its intersection with no. 102. Take the latter which crosses the southern slope of the Massif with various ups and downs until you reach the Campo Croce area, in whose hotel you can stay overnight. Second day: just behind the hotel, take path no. 100 which leads to the ridge above, touching the Legnarola mountains. Palla, Colombera and Meda. Once you reach the Bassano refuge along the path n ° 156, always along the ridge you reach M. Valderoa. Once you get off at Malga Salarol a pastoral forest road leads to the underlying Val delle Mure, at whose homonymous hut it is possible to stay overnight during the mountain pasture period (May / September). leads to Malga Camparoneta; in short to Campatoneta fork from where the path n ° 849, with a suggestive route, leads to Cima della Mandria. Once back down to Malga Vedetta, along the mule track (n ° 152) you cross the precipitous slopes of the Meatte. From the pasture plateau of Pian della Bala you finally reach the San Liberale Valley along path no.151.

The Sass Brusai via ferrata – 3.30 am
From Paderno del grappa go up the Lastego valley to the small church of Saints Liberale and Vitale. In the foreground you can see the jagged cliff of Sass Brusai. Also recognizable is the Carpen dorsal wood, which rises between the Boccaor valley and Giassa. Through this ridge leads the marked path that departs from No. 153 and steeply climbs to the start (about 1180), 2 hours.
The via ferrata exceeds, on the south ridge of Sass Brusai, about 350 m. in altitude. However, it is not guaranteed without interruption due to the structure of the terrain, which leads to easy sections of the path in steep jumps. You then have the opportunity to catch your breath and admire the beautiful views of the underlying S.Liberale Valley. The less experienced, at the start, can take measures by facing a 10 m gully. with a few steps. Those who already encounter serious problems here are better off turning around: the path that follows becomes even more challenging!
The experts of the via ferratas will enjoy the varied difficulties of climbing: firmly anchored metal ropes allow a pleasant, albeit arduous ascent, on the Pilastrini, on the Borsai ramp (Borsai is a dialect term for the grass eaten by sheep, called Festuca ovina), proceeding up to to the Sella del Candidato, then following through the Salt della Mazzetta and the Scalin dee Vespe and only afterwards you reach the passage that makes the ferrata original: an oscillating bridge suspended at an aerial height above the supply path of the First World War that it crosses the southern flank of Mount Boccaor (n ° 152). Whoever does not feel like passing this test of courage can go down the path. For others, the surprises of the via ferrata are not over yet. After the passage on the rope, a small crevasse follows that you jump with a leap, before a small, almost vertical wall with few grips blocks the way for the mountaineer as the last obstacle. Finally a narrow path leads to the Cima del Monte Boccaor (1532m), 1.30h .. Downhill you reach the Sella delle Mure (1500m), then along the winding old war path n ° 153 you go down to S. Liberal, 2 h ..

The equipped path Carlo Guzzella – 4 hours
From San Liberale to the west of a side valley. At first you follow a forest road then you quickly climb up a wooded ridge. At an altitude of 1000 you cross path n ° 102; after about 2 h. we arrive at the attack (around 1220). The well-marked trail draws a rapid line across the jagged cliffs of the Napons.
The view on the Conca valley

Firmly anchored wire ropes guide the mountaineer in the ascent, facilitating the most difficult passages. It is important to proceed in a disciplined manner so as not to recklessly move the ground. About halfway the equipped path crosses the dorsal road (around 1420), which runs obliquely along the east side of Mount Grappa. If you are surprised by the bad weather, you can easily interrupt the tour here (15 min. To Pian della Bala). The via ferrata crosses a rocky step followed by a steep grassy slope. A short but rough chimney forces the climber to commit again, then the path winds up a ridge of the ridge to the alpine pastures of Prà Gallina (around 1600). You can then easily reach the Bassano Refuge (1745), 2 hours. For the descent, take path no. 151 which leads to the castle road at Pian della Bala. Now on the right on an old military route, marked 151, you go back down to the San Liberale Valley, 2.30 h. 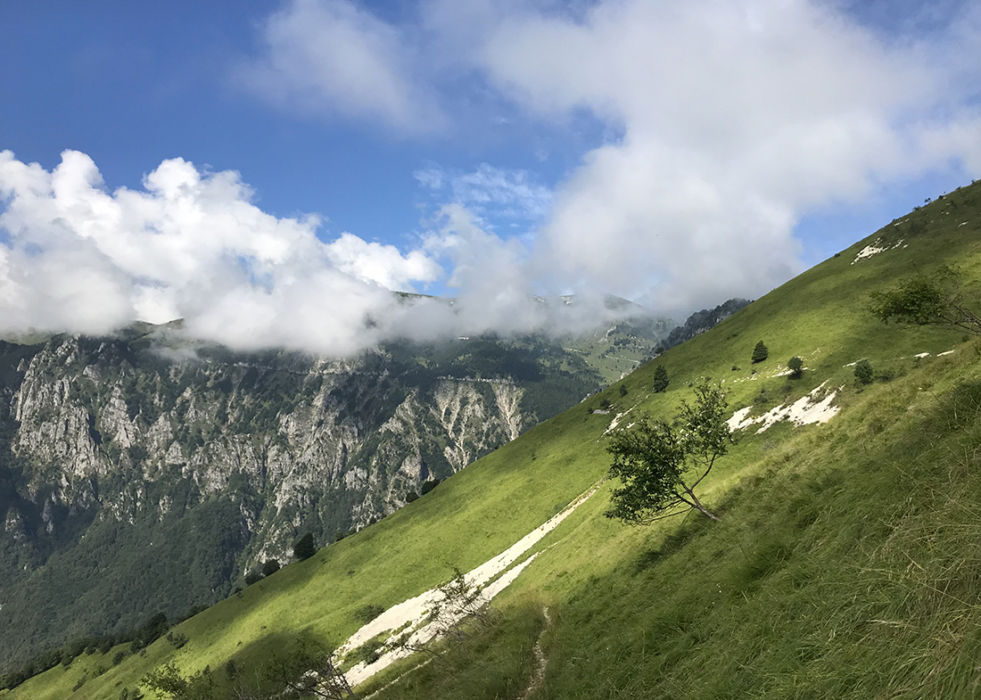