The history of vine cultivation in the Piave area

4 JULY 2014
ARTICLES | RELEASES
The history of vine cultivation in the Piave area from the married vine to the bellussera
If we looked at an old photograph of the lands of the Piave dating back to a couple of centuries ago, we would see a vineyard landscape very different from today’s one. In this area, starting from the end of the 17th century, the high population density required the maximum exploitation of land to survive and this also greatly influenced the landscape.

From the late Middle Ages – but certainly also in Roman and pre-Roman times – and until the end of the 1800s, throughout central and northern Italy the vine was bred by “marrying” it to a live tutor, to compose rows on the edges of the property or to divide it into plots as regular as possible, intended for cereal crops or grass. This system takes the name of “alberata”, that is a single tree on which to grow one or more vines, or “planted” when with the same technique it creates a sort of row.

The support for the vine was in any case always a tree, and could be a maple, an ash, a cherry, a willow, a mulberry or a poplar. The choice was made carefully according to the place, whether in the hills or in the plains, or the type of soil, wet or dry, or family needs. Each land more willingly welcomed a botanical type rather than another, in perfect symbiosis between them, guaranteeing other precious advantages that could be obtained from the plant, such as the material to tie the shoots, the wood for different uses, the nourishment for silkworms, or simply a growth trend that facilitated the good ripening of the grapes.
The vines were married in number from one to three per tree, and placed at a distance of twenty or thirty centimeters from this. For the first 4/6 years the plant grew freely and then was forced to an ordinary pruning, which involved the presence of two or three long shoots, twisted together and tied with those of the closest lateral vine to formed festoons.
The rows of married plants marked the boundaries of the property of the fields with geometric lines that gave order and harmony to the landscape, creating evocative scenographic backdrops as evidenced by some of the many authors who reached Italy between the eighteenth and nineteenth centuries traveling through some great regions of Europe, a journey that served to train and be accepted in the great literary circles.

Goethe, for example, wrote in his “Journey to Italy”… the road that leads from Verona to Vicenza is very pleasant, wide straight and well maintained. Long lines of trees can be seen and around these are wrapped the branches of the vines that fall down. The ripe grapes press on the shoots which, vacillating, fall dangling.

The vines were compulsorily cultivated in promiscuous cultivation and between the rows there could be the lawn, or some interlayer crops, sometimes legumes, but mainly cereals. In fact, the “three fields” rule was in force, whereby the entire plot was divided with the trees into three parts, one of which was planted with corn to obtain the flour for daily polenta, the other two with wheat. This was used to pay the rent or to pay the sharecropping contract, which always provided for the conferment of a share of grapes or wine, together with a certain amount of wheat, as well as the tithe and the quartese to the Church. The rest could give the farmer a small income, as well as a little flour to make bread and vary the diet.

Alongside corn and wheat, the vine allowed, after due contributions, a minimum income in money and some source of caloric energy to support the efforts in the fields. However, such an association had negative effects such as the nutritional and water competition that the living support and the cereals exerted to the detriment of the vine and the subtraction of solar radiation that the tree crown provided. Furthermore, the work with the plow could not be done too close to the tree and this forced the farmer to laborious hoeing operations to cultivate this portion of land as well and ensure the survival of the vine.

Depending on the morphology of the site, whether flat or hilly, viticulture was characterized by three different cultivation systems; the vine-covered ronco (typical of the hill) which provided for the typical terracing of the sixth of the plant, the arborated vineyard with trees oriented parallel to the longer side of the field, to facilitate the processing of the sown part, with distances of at least 10/12 meters between the rows and 3/5 between one plant and another in the same row. And finally the vine-covered lawn (typical of the plain) with distances similar to the previous one.

The trees were the element that most characterized the landscape of the Piave plain up to the 19th century, the real creator of which was manual work. An archaic system, unsatisfactory

nte but mandatory. Consider that already in the 16th century we read how the arable planted with vines, in the plain of the Piave and the Opitergino, was the most widespread method of cultivating the land, occupying on average at least 60-80% of agricultural areas and arriving even to higher values.

If in the 19th century the specialized vineyard was non-existent, the planting and the tree-lined were so little rational from a production point of view, that Carpenè and Vianello, great luminaries of the Conegliano Enological School, in 1874 estimated that an area of ​​22 hectares of mixed cultivation were equal to only one hectare of specialized vine cultivation.

Almost everywhere in Veneto the change in the landscape, from the ancient tree-lined and planted to more modern forms of farming, was slow and began only at the end of the 19th century thanks to a system designed by the Bellussi brothers, in the small town of Tezze di Piave in province of Treviso, which brought with it a series of advantages contributing to its spread even beyond the Piave area: the Bellussera.

The trend of the vine changed by rationalizing its cultivation, but the survival needs of the population remained in vogue until the Second World War by using the necessary mixed cultivation. Gianni Moriani writes ”this is an ingenious solution that is surprisingly precious to the eyes, like a lace made with the famous stitch in the air, a specialty of certain lace makers in our estuary. I enter this green “church”, through a door that is always open, on a bright day, moved by a zephyr that makes the leaves swing: the scene brings to mind the kinetic art of the installations created by Alexander Calder. I believe that the brothers Antonio and Matteo Bellussi, brilliant creators of this highly original viticultural system, starting from an idea of ​​their father Donato, are fully registered among the forerunners of kinetic art. Like the most daring architectural works, the Bellussera is also based on iron geometric principles. From each support the shoots radiate out to capture as much sunlight as possible. It can be said that once the braces are removed, everything hangs on the lightness of a thread ”.

This form of training is characterized by four or six vines, initially supported by a live stake, then replaced with a dry pole, each of which has a long permanent cord of three or four meters pruned in Sylvoz, inclined upwards and carried in the ‘between the rows and, in the case of a six-vine plant, also along the rows, so that the vineyard appears from above as a radial pattern. A sort of pergola for which the shoots are forced along iron wires, in pairs called radius, stretched between one row and the other to form a sort of quadrangular radial pattern, at a height of about 3 meters from the ground and away from the spin for about one meter. There are no longer long fruit heads, but a branch with 5-6 much shorter heads with a few buds that are folded down. The shape that was given to the vine was wide, expanded, high from the ground and productive. In fact, it made it possible to obtain a healthier, richer harvest – almost 30 hectoliters per hectare – to meet the need of the historic Piave grape for which it was created, the Raboso Piave, to use the abundant family labor of the times and to continue to use the live support of the tree and reap the benefits associated with it.

The quality also gains thanks to the passage from a long pruning to a shorter one, “small and numerous clusters, smaller grains and more concentrated and ripe juice with thicker and more colorful skin, for which you have a chosen wine, reuniting in itself to the maximum degree the characteristics that make it a half-cut wine “. The considerable height allowed to keep the vegetation and the production very far from the ground, limiting the damage due to the spring frost and reducing the effects of the autumn mists, more than negative, for a very late variety.

The Bellussera has been part of the viticultural landscape of the Piave river lands from the 1900s to the present day, still remaining visible today in some sparse vineyards in the border area between the upper and lower Piave plains. Large, unmistakable, ingenious geometry that makes it a sign not only of human ingenuity and agronomic science, but also an example of truly sustainable viticulture.

On the other hand, this system caused some damage to the associated crops, which do not disappear but are limited to forage, a high cost of the plant and of labor – 400 hours per month compared to the 180/190 of the espalier tradition – shorter life span of the plant and greater exposure to hail.

Today the Bellussera is still present, as a sign of a proud wine-growing past, but the new production realities are introducing more and more alternative farming systems that are more mechanizable and economically more competitive, but in no case are they

will be able to find a similar example of sustainable viticulture perfectly integrated with agricultural activity that is able to meet the needs of the entire peasant family.

The Cecchetto winery, born from a long family tradition that combines it with the cultivation of vines and the production of wine, has its headquarters in Tezze di Piave, in the heart of the Doc Piave area, in the province of Treviso.

The story of Giorgio Cecchetto is firmly intertwined with that of his land and its most important grape, the Raboso del Piave, a vine difficult to tame but capable of striking with its rough, bold, sometimes grumpy character. Therefore the production and most of the company’s efforts are aimed at enhancing this wine, the favorite son. In this winery you can taste different tests, interpretations, versions, experiments, discuss woods, refinements, harvests, winemaking strategies, withering regarding this vine of the Treviso province traditionally prone to angularity and here interpreted according to a more modern style. 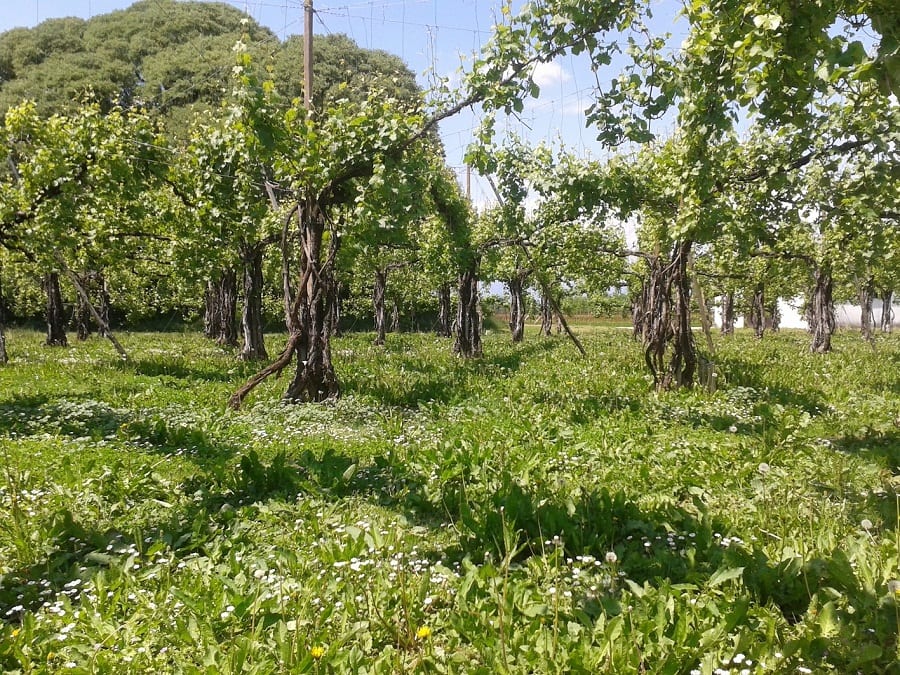