Bassano del Grappa, Marostica, Asolo, Possagno, Castelfranco Veneto, Cittadella, Valbrenta: many gems to rediscover
If Bassano del Grappa is a rare pearl located at the mouth of the Valsugana, the centers that surround it are precious gems that bathe the Pedemonte with their beauty. Alpine towns par excellence, proud of their hat with a black feather and of the solidarity that here, at the foot of the Grappa, has taken the paths of the world.

MAROSTICA
From the lower castle of Scaligera mano, amidst the beating of hooves on the pavement and the clash of swords and halberds, the armigers come out proud. The people surround the large square. Skilled hands weave the straw; craftsmen model vases and crockery. The castellan has invited the lords of the Marca and of the Po lands with their elegant entourage. Ladies and knights, nobles and courtesans. Next to Taddeo Parisio two splendid girls: they are the daughters Lionora and Oldrada. For the hand of the first, Rinaldo Da Angarano and Vieri da Vallonara will compete in single combat, both blinded by the beauty of the blonde girl. But it will not be armed confrontation.

A game of chess, with living pieces, in the immense chessboard of the square, will determine the winner. The loser will be the younger of the sisters, but no less attractive, the brunette Oldrada. The challenge is staged every two years, even those, animated by six hundred costumed characters. An exciting, unique show, followed by thousands of spectators. In September, the herald will summon the people of Marostice and the fairy tale will relive as if by magic, projecting the beautiful love story back 500 years. In the austere rooms of the lower castle there is the costume museum, an irresistible invitation to discover the charm of the “Game of chess”. But Marostica is not only kings and queens, horses and standard bearers, black and white. The thousand colors of spring shine in the rolling hills that surround it.

The cherry blossom show is not to be missed. They look like brides, waiting on a green carpet covered with yellow dandelion buds, of the beloved. The red, tasty and fragrant fruits, between May and June, will triumph under the vaults of the castle and on the tables of all Italy. With Mason and Pianezze, Marostica shares a solid tradition and protects ancient cultivars from extinction. “Sandre”, Bigaroux, Marostegane: they are the most pleasant and sweet on the palate.

From the lower castle to the upper one, the journey is short. Along the path that cuts through the Pausolino, within the walls protected by the “Compagnia” that every weekend takes care of stones and bricks, the view changes at every turn. At first the eye rests on the churches of S. Maria Assunta and S. Antonio Abate and their soaring bell towers, then on the plain that opens up to the south. At the top, however, the Asiago plateau announces itself through an infinite series of humps. The Alpine tradition is strong. In Borgo Giara the birthplace of Lieutenant Cecchin, decorated with a gold medal, takes us back to the First World War. Marostica was a sorting center and gateway to the plateau.

ASOLO
Superb and haughty, Asolo welcomes the visitor after a steep climb. Noble and sought-after citizen, she hosted Caterina Cornaro, queen of Cyprus in distant times. More recently, however, he offered residence to Eleonora Duse, who rests in the small cemetery behind the Franciscan oasis of Sant’Anna, and then the poet Robert Browning, who composed the last verses here, the musician Gian Francesco Malipiero, the traveler and explorer English Freya Stark, whom the Queen Mother of England, about twenty years ago, wanted to meet in the shadow of the fortress that dominates the center.

The narrow streets that cut through the town offer the visitor unique corners: buildings and shops follow one another in a long theory. Peace and tranquility reign supreme. A couple of hours are enough to visit it and fill the heart with sweetness and serenity.

POSSAGNO
Beyond Asolo, at the foot of the buttresses of Monte Grappa, is Possagno, a small town made famous all over the world by Antonio Canova who was born here and here began, under the expert eye of his grandfather, to sketch the stone. To welcome the visitor and the wonderful Canovian temple that the neoclassical sculptor wanted to donate to his fellow villagers, proud to be able to reciprocate the illustrious “possagnott” by offering labor, lime and sand, essential for the construction. Antonio Canova rests in a funeral urn on the left, near the entrance.

Descending the long staircase and reaching the main street, the Gipsoteca opens up, a casket full of treasures built next to the artist’s birthplace, which Carlo Scarpa enlarged in the second half of the last century. The museum, directed by Mario Guderzo, curator of the great Canovian exhibition that Bassano hosted between 2003 and 2004, exhibits plaster casts and sketches of the sculptures created by the genius of Pedemonte. Preparatory works, of course, but no less beautiful and important. From the Three Graces to the Dancers, from Love

hours and Psyche to the lying Naiad, neoclassical sculpture has found protection and hospitality in this small town. In the house, on the other hand, a rich collection of drawings, engravings, tempera and monochrome is exhibited.

CASTELFRANCO VENETO
Between Brenta and Piave the plain opens up airy despite the wild overbuilding of recent decades. Bassano, by now, is a single urban center that groups cities and towns in the Vicenza, Marca and Padovano areas. A stone’s throw from Asolo, is the homeland of Giorgione, the painter who died at a young age, the author of extraordinary masterpieces. Above all the Storm. Sublime brushstrokes, flashes of white on dark colors. An enchantment. Walled city par excellence, Castelfranco. The ramparts defend it, tall and mighty, and within the walls the bustling life with all-Treviso vivacity made up of “cicchetti, ombrette and spunciotti” and lots of ciacole.

The castellan interlayer is sweet to the ear, musical. It is no coincidence that it is home to a prestigious conservatory, the Steffani, from whose classrooms melodious notes are emitted at all hours of the day. The people are available, the land generous. Here is born that red radicchio with a lot of brand to guarantee its quality that cheers up the winter tables and stimulates the imagination of international chefs. The old taverns have given way to modern places, but the Borsa exudes an ancient air. The Alpine troops are at home, welcomed with friendship and sympathy.

CITADEL
Fifteen kilometers from Castelfranco and as many from Bassano del Grappa, here is another faithfully preserved walled city. Cittadella la bella. Tradition has it that the notes of the “Canzone del Grappa” sounded here for the first time, during the First World War. Rear area. The troops rested waiting to resume the assaults on the Berretta, Fenilon, Asolone. Historians are divided.

There is also Rosa ‘, halfway from the wooden bridge, to support the birthright of singing. Monte Grappa you are my homeland…. The verses chase each other rhythmically, return whispered, regain vigor. Thrilling. The four doors leading into the historic center are one more beautiful and powerful than the other. Majestic, strong, among the best preserved in Europe.

VALBRENTA
The terminal part of the Valsugana is a deep wound between the Grappa massif and the Asiago plateau. The Brenta flows impetuously there before calming down at the sight of Bassano, digging the stone. Very high walls rise on both sides of the valley. The Covolo di Butistone, near Cismon, is a work of military engineering. Excavated centuries ago in the rock, high, it housed hundreds of men. An insurmountable obstacle for the armies that descended ferociously from the north, determined to make mulch of the fertile Venetian plain. The villages follow one after the other, on the right and left of the Brenta.

A ring, with departure and arrival at the Ponte degli Alpini in Bassano, of about thirty kilometers. Primolano was the last outpost before Austria. It marked the border. On the way down you meet Cismon, S. Marino, Carpane, S. Nazario, Solagna and Pove. On the other side of the river, on the right bank, there is Costa, Valstagna, Oliero, Campolongo, Campese, Sarson, S. Eusebio. Houses clinging meticulously to the mountain. Hard life in Valbrenta. In the last century, many sought work and fortune abroad, in the mines of Belgium and France, after military service, strictly in the Alpine Corps. The only period of youth that the deputies remember with nostalgia and affection. 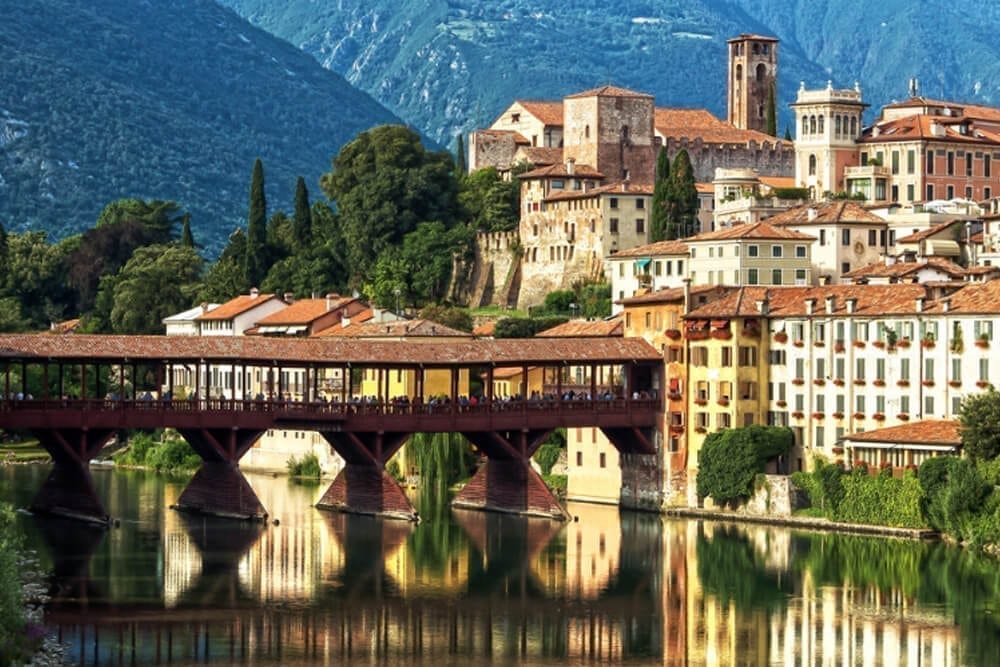