360° on the UNESCO Dolomites: from 19 June the Marmolada – Move To The Top cable car starts again

Views of history, nature and gastronomy in the heart of the Dolomites

From Malga Ciapèla (1,450 m) to Punta Rocca (3,265 m) in just 12 minutes to reach the only point from which you can admire all 9 systems of the Dolomites, a UNESCO World Heritage Site, and more. The Marmolada, where every “panorama is a state of mind” between yoga lessons and sunsets in music, perennial snow, historical testimonies and the highest museum in Europe, returns accessible from 19 June to 12 September with the reopening of the Marmolada Move To The Top cable car. Among the novelties of the season, the possibility to buy the ticket also online.

Malga Ciapèla (BL) 18 June 2021 – Named the Queen of the Dolomites, with the distinction of being the highest peak in the UNESCO World Heritage mountain group, the Marmolada (3,343 m) holds a particular charm even during the summer. A popular destination for mountaineers, it is accessible to anyone, thanks to a cableway system with stations without architectural barriers, and allows you to admire a spectacular view as well as touch the traces of history and sacred places. Its top station, Punta Rocca (3,265 m) located right in front of the main peak, Punta Penia, can be reached in just over 10 minutes from Malga Ciapèla (1,450 m) with the Marmolada cable car – Move To The Top: a journey which leads to the discovery of boundless landscapes, from June 19th to September 12th, and at every glance reveals new perspectives and emotions that embrace nature, history, spirituality.

A panoramic terrace with glass balustrades, where the view extends as far as the eye can see from the Dolomite peaks to the Venice lagoon and the Austrian peaks, but also downwards showing the overhanging south face of the Marmolada in all its beauty, from a on the side and on the other towards the largest glacier in the Dolomites and Lake Fedaia: it is Punta Rocca (3,265 m), the highest place that can be reached directly with the Move To The Top cable car, from whose arrival station there are two glazed elevators that they also allow access to those with disabilities. Here, during the summer, some initiatives are organized by appointment that combine panorama, leisure and well-being. Yoga dalla Regina offers every Friday, from 9 July to 3 September, yoga classes that soothe body and spirit, followed by a hearty breakfast at the Bar Restaurant in Serauta station (2,950 m). Sunset in Jazz, scheduled for August 20, instead offers the spectacle of the Enrosadira – the characteristic blush of the Dolomite rock at sunset – to be admired after enjoying an aperitif to the rhythm of Jazz music organized at the Serauta station. The Marmolada will also be the place where the Holy Mass will be celebrated on 26 August in memory of the visit of Pope John Paul II: an event that combines the spirituality of the Holy Pope and the solemnity of the Dolomite mountain to which he was particularly fond. Descending in altitude, at the Punta Serauta station, history is the protagonist. The Marmolada Grande Guerra 3000 M Museum, completely renovated and enlarged in 2015, offers a multimedia journey through the soldier’s daily life: glimpses of humanity, testimonies and remains that emerged from the tunnels dug into the Marmolada glacier during the First World War, where placed attention on the emotional aspect of war and the hard life of soldier men, without pointing out differences of flag or nationality. But not only that, from the station of Serauta, in fact, a path winds its way to discover the Sacred Monumental Area: a narrow path on the south-east side of Serauta, well traced and facilitated with a wire rope in the narrowest and most exposed passages, which crosses ancient walkways from which you can see the cavern of the command post, the observatory, the infirmary and the cableway station of the Italian Fort. Dedicated to more experienced hikers, moreover, the itinerary that leads to Forcella Vu, where 15 Italian infantrymen who fell due to an Austrian mine are probably still buried: a route that can be carried out safely with the accompaniment of a guide specialized, by reservation. To complete the trips and excursions, you can refresh yourself at the restaurant in Serauta or at the bar in Malga Ciapèla.

Key word: innovation. Looking to the future and renewal is an aspect that increasingly distinguishes the Marmolada – Move To The Top cable car complex and its attractions. The interactive Geochip guide, for example, allows you to independently know and deepen the most important aspects of the Marmolada and the Marmolada Grande Guerra 3000 M Museum. News of the season, moreover, the introduction of an online shop for the purchase of cable car tickets, which will reduce and speed up the queues at the tills: from the site of Funivie Marmolada or Dolomiti Superski, a simple procedure allows you to receive via email a voucher with QR code, required to access the facilities. 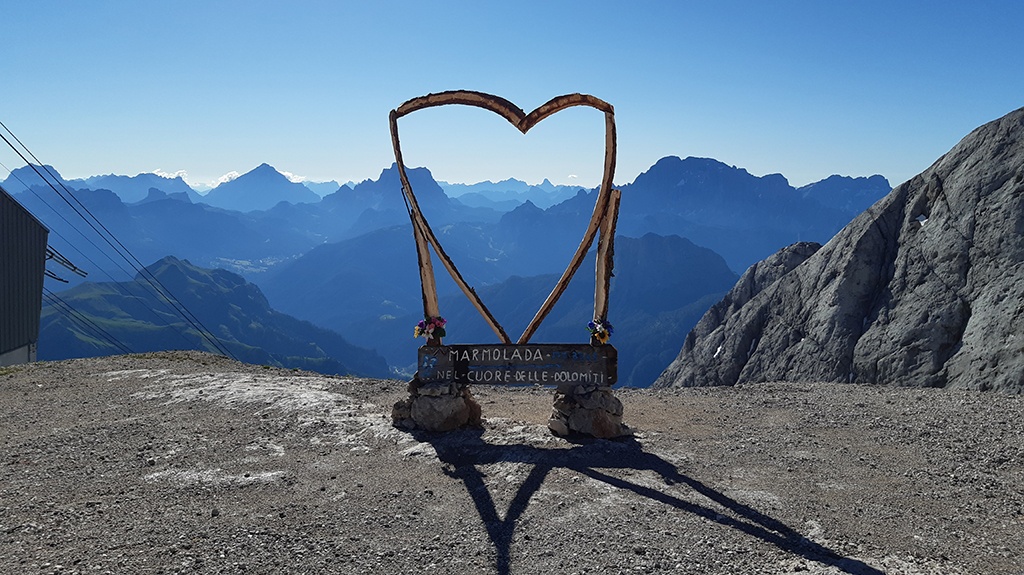